In 1981 I was teaching in Nanaimo, British Columbia, Canada and I taught with a teacher named Pat Lyon. She taught ESL (English as a Second Language) to children who did not speak English. She was also very involved in the Multicultural Society who supported new immigrants to Canada. One day she asked my wife and I to come over for a barbecue. We accepted and then she said, "Oh, I have invited a family from Czechoslovakia to come as well and we are going to teach them about Canadian idioms". I said that my wife and I weren't experts on idioms but she said that we would be surprised. That afternoon my wife and I discovered how many idioms we knew and how they are so much a part of everyday speaking that we don't even recognize them. I decided to start teaching idioms in my classroom. Over time, I found several lists of idioms and had my students draw pictures of the literal meanings. 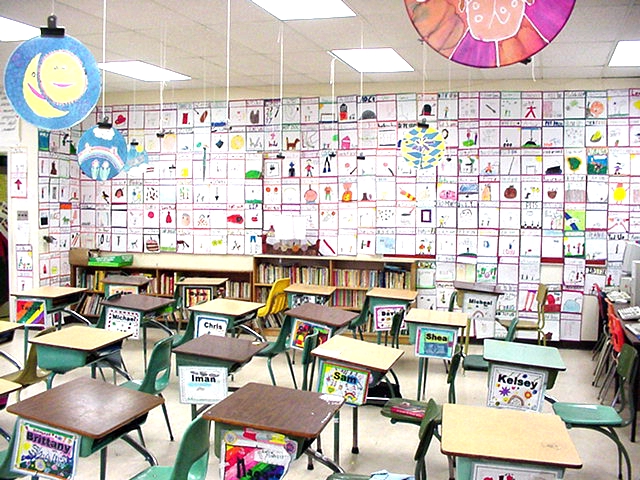 Each student who was finished their classwork would select an idiom from the list and draw pictures of exactly what the idiom said, not what the idiom meant. This was used as a team competition for the students and as an overflow and language activity for the teacher. The idioms were only explained after the student had drawn the picture. There was nothing more fun than spending the last 5-30 minutes of a day or morning etc. to share some great art, build team spirit and teach language. 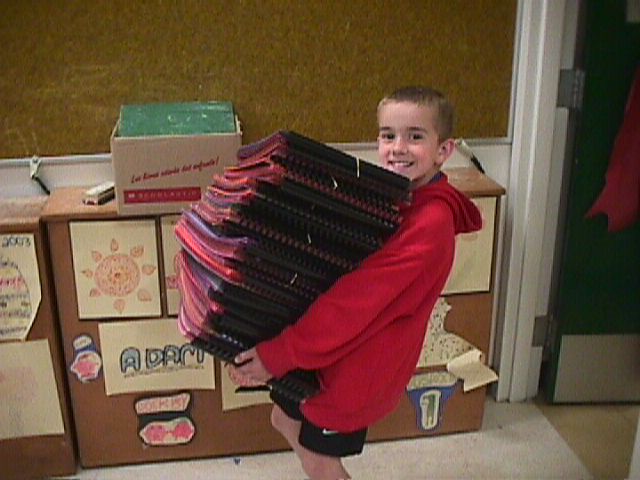 After they were explained they were posted on the wall for the remainder of the year. At the end of the year the drawings were taken down and each child's drawings were bound into a book to take home. One notable student named Adam got "carried away" in a good way and this is what he took home that year.

Besides being a great artist Adam was really into sports. I have used his name in all the the Sports stories. With the invention of the Internet and digital scanners my approach to idioms started to evolve. I found an excellent list of Canadian Idioms that Wayne Magnuson had created. I contacted him for permission to use his list and then edited the list down to eliminate any idioms that were not appropriate for young children. This list is available for teachers who would like to use it. When the school got computers we were fortunate enough to have an Intranet. (that's when all the computers are connected together and we could all use the printer and computer programs) I then had the bright idea to scan the pictures and put them on the Intranet so that other children in the school could also see them. For enrichment, students who were capable and willing would scan the idioms and I would upload them to the Intranet. Once the Internet came along, I took the idioms and posted them on a website so that the whole world could see them.

Once I retired, I had more time and it then occured to me that the pictures, while interesting, were not very educational. I then started writing definitions and using them in sentences. Eventually, I started writing stories that used the idioms and linked them back to the pictures. Over time other teachers would submit the drawings that their children had drawn. I would write a story using just their idioms. I then started to encourage teachers to get their students to write the stories. There are now several student written stories on the website. The website grew like "topsy" and the web structure chaotic and obsolete. NISA had been my Internet Provider for this entire time and I approached them for help. NISA decided that they would adopt the website and a programmer decided that he would like to help. This is the structure that you see now and for the forseeable future will be "Under Construction" as I add more stories and idioms. Eventually all the the idioms with pictures will appear in stories. Most of the pictures were drawn by children from my classroombut now the whole world is adding their own drawings. The children who drew the original pictures were 9-11 years old when they drew them. Over a period of years, the children in my class went "kooky" learning and drawing pictures of them. I thought that the "kids"

were going to send me to the "nuthouse".

These pictures illustrate what an idiom actually says and not what the idiom actually means.I used a loose definition of idioms to basically define idioms to be idiotic. In other words they are expressions that generally need explanations to be understood. This is what the walls of my classroom looked like at the end of the year. 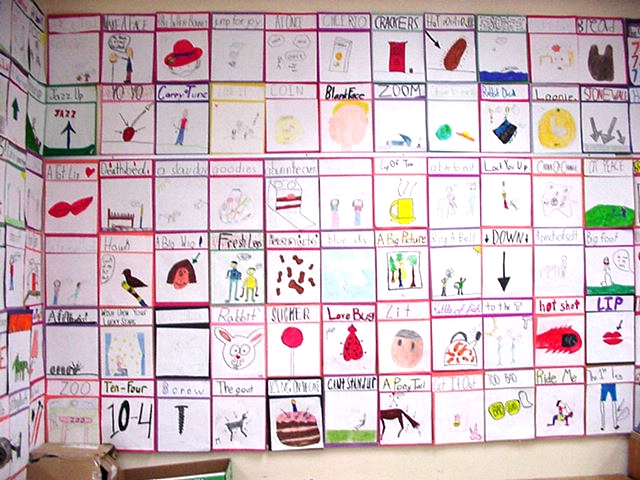 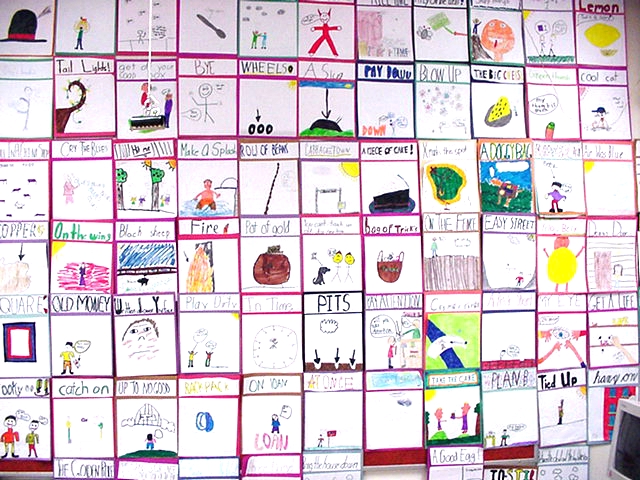 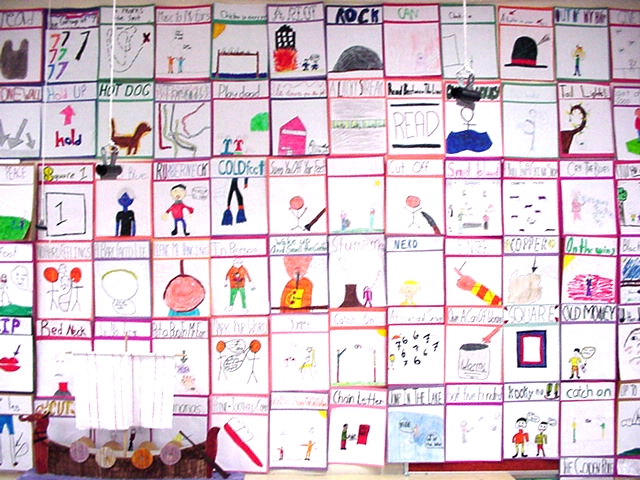 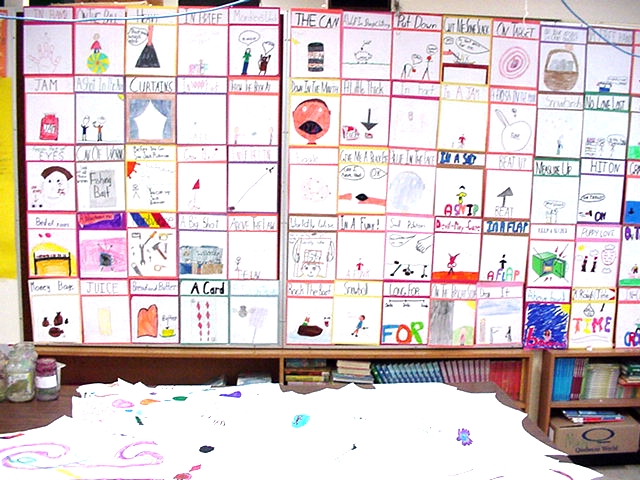 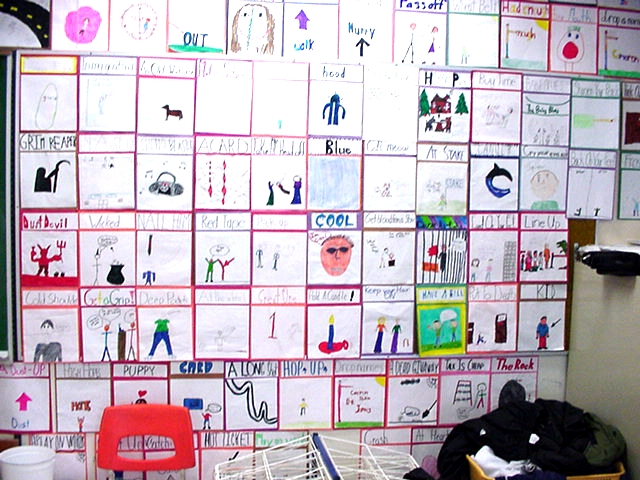 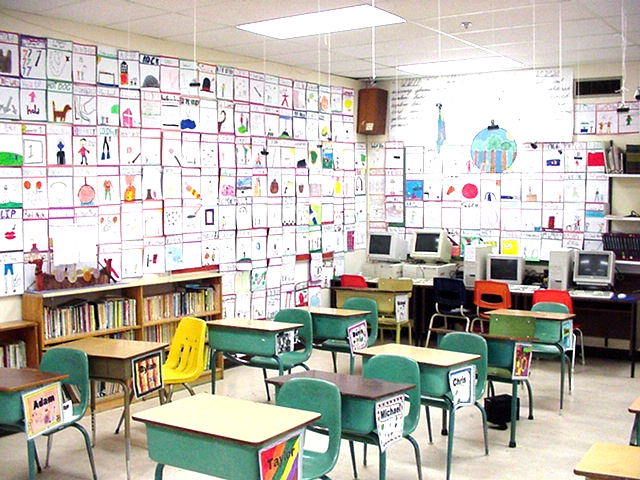 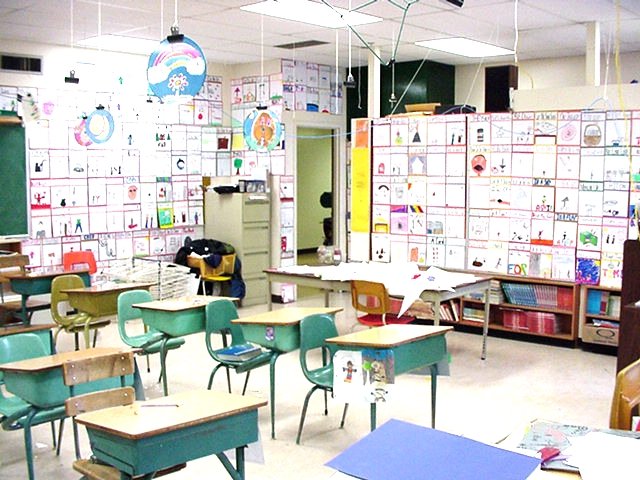 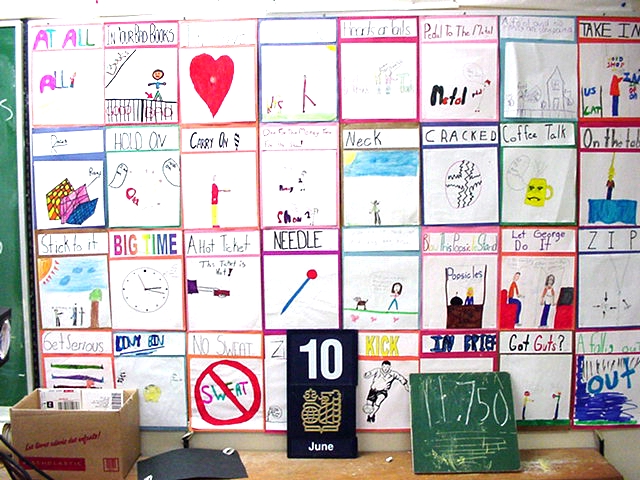